Benadryl, or Diphenhydramine, is an FDA-approved antihistamine that is often used to relieve allergy symptoms, mild coughs, motion sickness, and mild forms of insomnia. It has also been used in some cases to treat early symptoms of individuals with Parkinson’s Disease, more specifically to control the body’s abnormal movements that often take place at the beginning of this disease. Benadryl is an over-the-counter medication, meaning that people can buy it without a prescription. This drug is a common household name, making it easily accessible.

Because Benadryl is both legal and over-the-counter (OTC), the dangers associated with it are often overlooked. It wasn’t until recently that the threat of Benadryl abuse was even a fear of parents, but young people are actually using and abusing this drug more and more, leading to health complications and severe consequences.

When used as prescribed, Benadryl reduces symptoms of allergies or allergic reactions by blocking the body’s histamine response. It is often used to address seasonal allergies such as runny nose, itchy eyes or watery eyes, hives, hay fever, sneezing, skin rash, trouble breathing, and some types of cold symptoms. Normal doses of Benadryl also cause drowsiness which is why it is used to treat mild forms of insomnia. Some of the common side effects caused by low to normal doses of Benadryl are:

When taken at high doses that are not recommended, Benadryl can lead to a sense of intoxication and increased sensations of euphoria, much like alcohol or other drugs. Users may also experience more intense side effects of Benadryl including hallucinations, delusions, vision problems, increased restlessness, loss of consciousness, cognitive difficulties, anxiety, mood swings, depression, and loss of coordination.

Individuals who abuse Benadryl may experience different long-term health complications depending on how much and how often the drug was taken. Some of the health problems linked to Benadryl abuse include:

Because Benadryl is so easy to access and is legal, it can be difficult to know when someone is abusing the medication let alone when they are addicted to it. Knowing what a Benadryl overdose looks like could help to save someone’s life. A person overdosing on this medication will exhibit some of the following signs:

If you see someone exhibiting any of these symptoms, it is critical to seek medical help immediately. Calling poison control or 911 is critical and always the best option if you believe someone is overdosing. 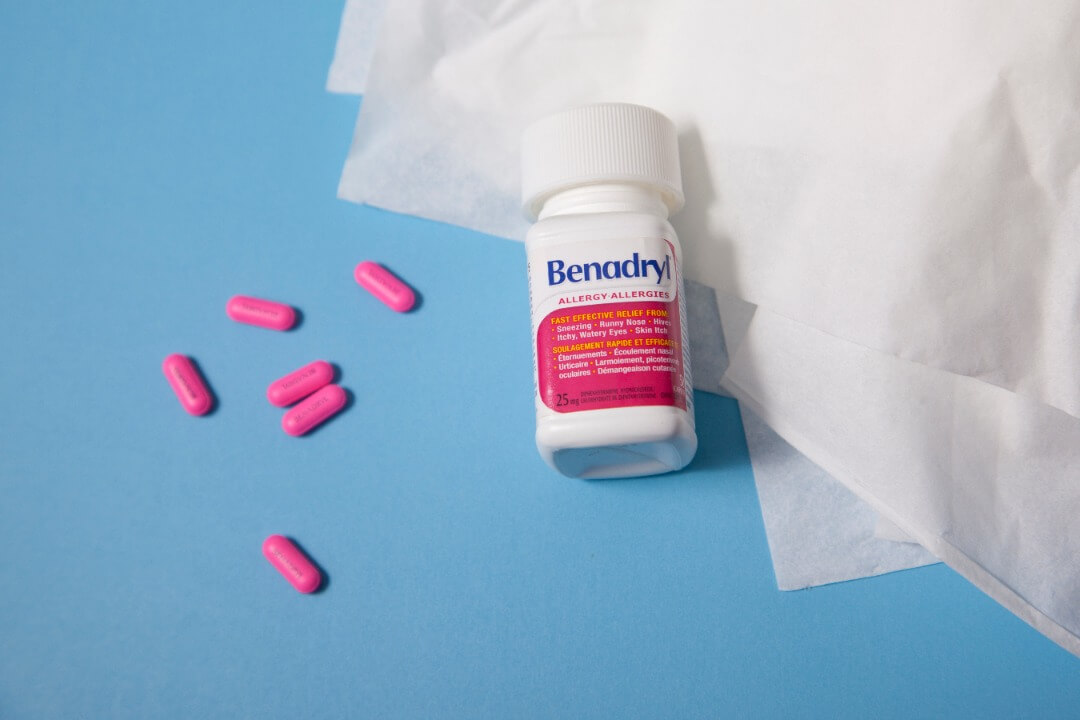 Recently, with the rise of Tik Tok and other social media trends, the Benadryl Challenge has encouraged younger individuals to participate in the abuse of Benadryl. This challenge began on Tik Tok, where over 60% of the 80 million monthly users are between the ages of 16 and 24. The Benadryl Challenge encourages younger people to “overdose” on Benadryl in order to induce hallucinations because this drug is accessible and legal. Because of this challenge, there has already been one death reported, and more and more young people are experiencing complications that may lead to hospitalization.

When abused in this way, death is a real possibility, especially for young people who are smaller and are unable to metabolize Benadryl at the same rate that an adult can. And even if death is not the outcome, abuse of this drug can lead to addiction, intense withdrawal that results in cravings, and long-term health problems that stay with the individual for the rest of their life.

The warning label of any box or bottle of Benadryl makes it clear that taking Benadryl while also drinking alcohol potentially can cause death or overdose, especially when both are used at high doses. Alcohol is a depressant, causing sedation, relaxation, and loss of coordination. Benadryl causes similar symptoms. When taken together, a person may slip into unconsciousness or take too much of either that their bodily functions slow to a deadly pace. And because alcohol can continue mixing with the bloodstream even after a person has stopped drinking, someone who has taken Benadryl may accidentally overdose.

If a person is actively taking antidepressants while also consuming large amounts of Benadryl, he or she may experience an increase in the listed negative symptoms that Benadryl can cause. Benadryl may also interact with certain supplements or prescription medications, so it is always best to check with a doctor before taking Benadryl if other medications are also taken.

Long-term use of any of these antihistamines outside the bounds of what is prescribed or what is recommended by the Food and Drug Administration (FDA) can cause an increased risk of many medical conditions even though none of these are prescription drugs and can be bought over-the-counter.

If you or someone you know is struggling with Benadryl abuse, especially if they are a younger person, seeking professional treatment is the best way to address this problem. A person may need to detox at the beginning of their program in order to fully rid their body of the antihistamine and any other substances in the safest way possible. Detox programs and medication assistance can be used to address withdrawal symptoms safely. These programs will also provide clients with a safe place where they are able to work with a treatment team to develop a plan that addresses their needs and goals, working towards a long-term life of sobriety.

Cancel reply
« Whippit Abuse: Side Effects, Dangers & Treatments
Greening Out From Weed? Here’s What To Do »