Marijuana is one of the most commonly abused drugs in the United States, with almost 50 million people over the age of 12 reporting use of it in the last month. Of these individuals, approximately 5% of those people suffer from a marijuana use disorder. This substance is still considered illegal under federal law despite the fact that many states are beginning to either decriminalize or legalize its use.

Synthetic strains of the cannabis plant have become increasingly popular amongst young people, particularly because their legality falls into a grey area that has not yet been determined by the U.S. government. These substances are synthetic, meaning that they are derived from naturally occurring THC through the addition of chemicals. Despite being federally legal, both Delta-8 THC and Delta-10 THC only differ from Delta-9 THC, or what we know as cannabis, because of a few changes in the chemical structure of their atomic bonds. In most cases, these strains can be found in CBD, which is the second active ingredient in marijuana and does not cause a person to become high. CBD is legal across all states, and it is also legal when it has less than 0.3% of THC (Delta-8 or Delta-10).

People use these strains because while they are technically considered less potent than marijuana, they still deliver some of the same psychoactive effects. When it comes to the specifics, Delta-8 tends to be more calming like Indica strains of marijuana vs delta-10 products that are often more closely related to the uplifting Sativa strands that can be found in some THC products. Both Delta-8 and Delta-10 can be consumed via gummies, vapes, and edibles. 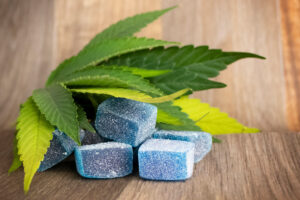 As a whole, recreational marijuana is illegal at the federal level. The issue of its use has moved to the states, though, where each state is able to determine if marijuana is legal and how. Some states, such as Utah, North Dakota, South Dakota, Minnesota, Iowa, Missouri, Oklahoma, Arkansas, Louisiana, Mississippi, Alabama, Georgia, Florida, Ohio, West Virginia, Pennsylvania, Maryland, Delaware, Hawaii, and New Hampshire are legal only if prescribed for medical use. Other states like Maine, Vermont, Massachusetts, Connecticut, New York, New Jersey, Virginia, Michigan, Illinois, Montana, Colorado, New Mexico, Arizona, California, Nevada, Oregon, Washington, and Alaska have completely legalized medical and recreational marijuana use.

The states where all marijuana use (both medical and recreational) is still illegal are North Carolina, South Carolina, Tennessee, Kentucky, Indiana, Wisconsin, Texas, Kansas, Nebraska, Wyoming, and Idaho.

Effects of Delta-8 and Delta-10

People who use Delta-10 THC products prefer the more energizing effects that it produces. When used, people often experience symptoms such as increased sensations of euphoria, focus, and energy. This strain is classified as a nootropic, meaning that it affects the brain through thinking and cognition. There is relatively little research on Delta-10 because it is a newer form of legalized CBD/THC, but users report increased activity and creativity.

Delta-8 THC products, on the other hand, are more calming and are often used to relax a person, increase appetite, or provide feelings of pain relief. Though still legal and widely in use, Delta-8 poses some potential threat of abuse because it affects the same receptors that Delta-9, or THC, does and can affect the brain and the body in similar ways while still remaining under the legal limit of 0.3%.

Regardless of the strain, both forms of THC attach to cannabinoid receptors, which causes the psychoactive properties and euphoric effects that marijuana users seek. These cannabis products can be found in CBD stores, gas stations, and smoke shops, making them easily accessible and available.

People often mistake legal for being safe, especially beginners who have not previously used any form of marijuana and are looking to start. The truth is that these synthetic strains of THC are new to the market, there is little research on their effects or potential for abuse, and we know very little about the long-term health consequences that may be present. The FDA has not currently approved any of these strains for use, leaving both Delta-8 and Delta-10 unregulated. Though a person may believe that they are purchasing a legal form of marijuana, other substances may also be present which could cause a number of complications, especially overdose or death.

People using these substances have experienced adverse side effects, including:

Another potential danger of using these products is that the manufacturing of them is unregulated. Different potentially harmful chemicals may be used in order to derive Delta-8 and Delta-10 from the marijuana plant, exposing users to substances that are not safe for consumption. These contaminants are often still present when Delta-8 or Delta-10 is smoked or consumed, leaving trace amounts of harmful chemicals in the body.

The FDA has also warned that Delta-8 products pose a threat of addiction or abuse as it is similar to THC in causing a high that users crave. And because it is legal and young people consider it safe, more and more of this drug is being used.

If an individual does become addicted to either of these synthetic THC strains, the best thing to do is find a marijuana abuse treatment facility. These treatment centers have experience in treating marijuana use disorders and can apply similar treatment techniques to Delta-8 and Delta-10 users.

While detoxification is not typically needed for marijuana abuse, inpatient or partial hospitalization programs can offer w wide variety of benefits. Clients will partner with their own treatment team, develop an individualized plan, and have access to medical support throughout their entire recovery journey.

Cancel reply
« Greening Out From Weed? Here’s What To Do
Is Percocet Addictive? »