What are the Signs That Someone is Shooting Up Drugs

Injecting drugs directly into the bloodstream, often referred to as "shooting up," is a common method of getting high. Even though this route of use comes with its own unique and severe risks, people continue to use this method. In this article, we look at several of the signs and indications that can tell if someone is shooting up drugs.

Opiates and stimulants are the two classes of drugs most associated with needle use. One of the more noticeable behavioral signs that someone is “shooting up” includes frequent and extended trips to the bathroom to get high. There may also be observable injection sites, also known as track marks. These are found most often on the arms and on the inside of the elbows, although they may appear elsewhere.

What Drugs Do People Shoot Up

There are many different drugs that people can shoot up, but some that are more common than others:

Injecting these drugs allows a smaller amount to produce stronger effects. The effects and dangers of these drugs can vary, as some of them produce powerful depression while others are powerful stimulants. Regardless of the particular drug, injecting causes tolerance to increase rapidly.

How To Tell if Someone is Shooting Up

Shooting up drugs results in a more intense high and the process itself can become somewhat addictive and ritualistic. A person may take frequent and prolonged breaks away from others so that they can shoot up. It is not uncommon for someone to return from these breaks in a different state than when they left. The state in which they return can depend on the drug they are shooting up. They may return in a hyperactive, talkative, and ecstatic state if they were shooting up a stimulant. If they are shooting up depressants, they may return almost comatose.

Shooting up drugs may also cause a rapid escalation in someone’s tolerance to a drug. This may result in a depletion of financial resources and frequent requests to borrow money. When friends or family members refuse to help, they may begin to steal to support their habit. 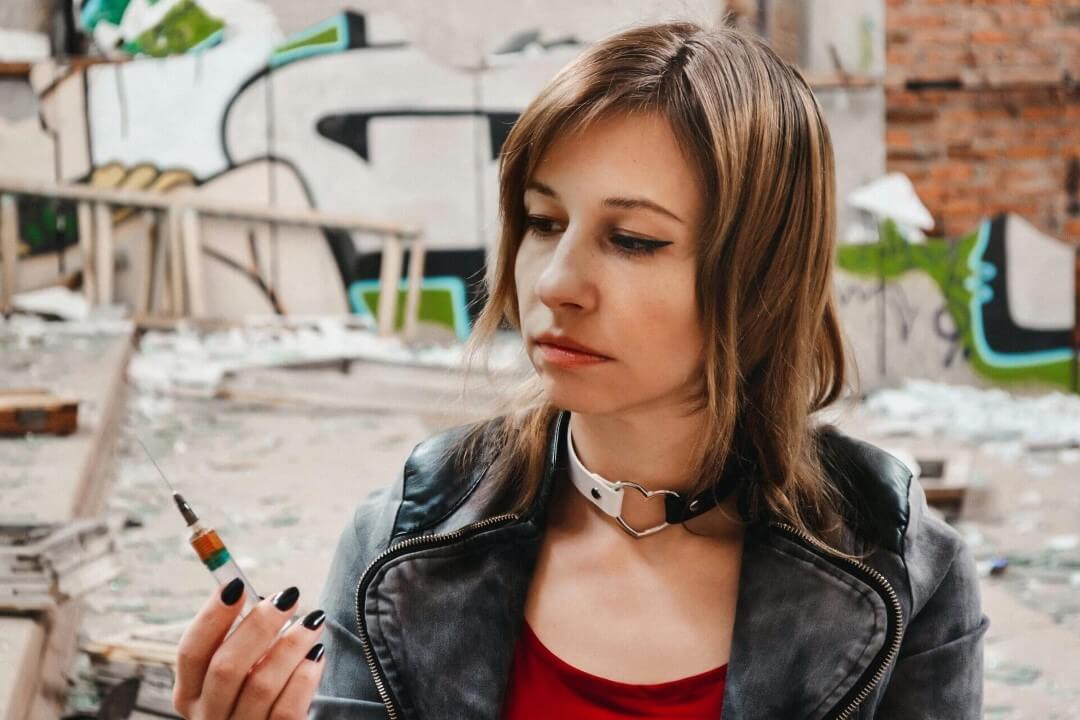 The inside of the elbow is the easiest spot to shoot up and it is often the area that someone starts shooting up in. After a while, veins and arteries may become damaged or “blown,” and they will have to find other spots.

Some common spots that someone may choose to shoot up drugs can include:

Track marks look like little puncture wounds. If someone shoots up enough, those wounds may be close enough together and numerous enough to appear like a long cut or scratch. People may wear clothing that is far too warm for the weather or setting, such as hoodies or sweaters. This is often done in an attempt to cover track marks and hide the obvious physical signs from people who may be concerned.

Some other things to look for that may indicate someone is shooting up drugs can include:

Pale skin, frequent illness, and skin infections are common signs that someone is shooting up drugs. Abscesses and swollen injection sites may also appear. A lack of proper hygiene and failure to disinfect the area before shooting up makes infection very possible.

Why People Shoot Up

When someone eats or snorts a drug, it must first pass through the digestive system and liver before it is absorbed into the bloodstream. Through this route, the drug dilutes and metabolizes. The amount that enters the bloodstream is much less than the ingested amount. By skipping this phase, known as “first-pass” metabolism, the drug can almost immediately enter the blood. Close to 100% of the injected drug will make it to the brain, producing a much stronger and more sudden effect.

Shooting up drugs may seem extreme. And it is. Why, then, would someone choose to use this method? Injecting drugs straight into the blood produces a more instant and intense high. This is often why people begin using drugs this way; the potent euphoria it produces. Tolerance will build rapidly, however, and it will become more and more difficult for someone to get high any other way.

After continued drug injection, the amount needed to get high by eating, snorting, or smoking would be immense. While shooting up may be a novel way to get very high at first, it becomes the only way someone can get high. It is also more efficient from a money standpoint as much less of the drug can produce a stronger effect. That being said, an injected substance metabolizes much more quickly than if it were taken another way. Someone will need to continue injecting at shorter intervals to stay high. This escalates drug use habits, oftentimes to where they must shoot up several times per day to prevent withdrawal symptoms from emerging.

Dangers Of Shooting Up

Shooting up drugs poses some unique risks compared to other methods of use. There is, of course, an increased risk of overdose as it is possible to inject a fatal dose in less than 1 second. For drugs other than opioids, once a fatal dose has entered the blood, there is little hope for survival unless medical professionals are already present. Opioids have a reversal medication in the form of naloxone, but this does not guarantee survival in case of an overdose. It simply increases the odds.

Aside from overdoses, there are many other dangers that accompany injecting. A few of the more serious dangers include:

These dangers should not be underestimated. They can cause severe complications and death. Sharing needles is quite common among people who shoot up drugs, and this can spread diseases. HIV/AIDS and Hepatitis C can be spread to others through sex, and someone may not even be aware that they have acquired these diseases from shooting up.

If someone has been shooting up drugs, it is common for withdrawal symptoms to be quite severe. If someone wants to successfully and safely stop using drugs, it is recommended that they enter a medical drug detox center. These facilities can provide medications, medical monitoring, and clinical services to reduce the risks and discomfort of withdrawal. After detox is complete, these centers may be able to refer someone to further treatment. Drug rehab programs provide tools and support for someone to continue their recovery and find a life free from drug use.